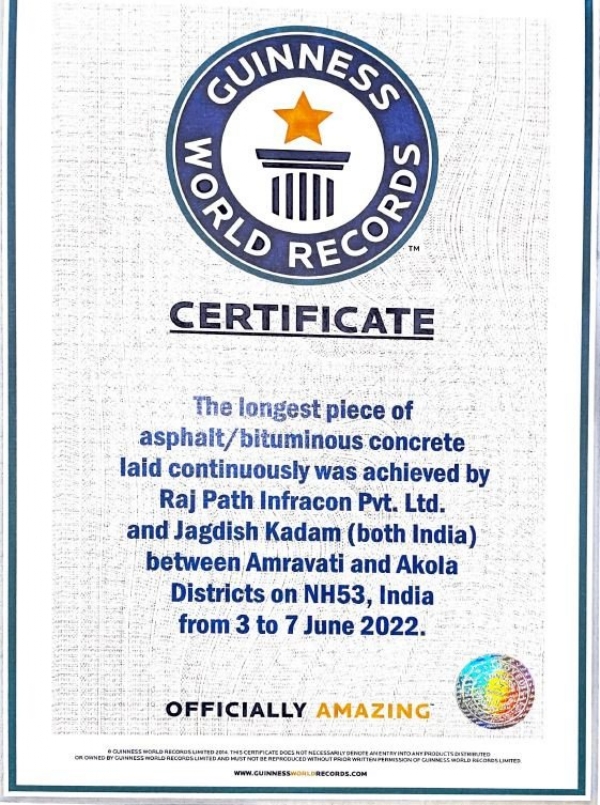 The construction of the Amravati-Akola highway started at 7:27 am on June 3 with the goal of finishing by 9:20 pm on June 7 to achieve the world record. To complete the job in the lowest amount of time, up to 728 personnel and 2500 workers participated, including highway engineers, safety engineers, and surveyors. The task was back-breaking because it was taking place in the scroching Vidarbha with temperature rising up to more than 47 degrees.
It is worthy to mention that the Rajpath Infracon has decided to dedicate this dauntless effort and achievement to the Azadi ka Amrit Mahotsav celebrating the 75th anniversary of Indian Independence. On the lines of “Gati-Shakti” project launched by the PM Narendra Modi under the dynamic leadership of Union Roads, Highways and Transport Minister Nitin Gadkari, the Rajpath Infracon’s project aims to achieve integrated and seamless multi-modal connectivity for the movement of people, goods and services across the country.

Honourable Union Road Transport and Highways Minister Nitin Gadkari took to Twitter on Tuesday (7 June) to inform us about NHAI's achievement. He said that the 84.4 Km single lane continuous Bituminous Concrete Road is equivalent to 42.2 Km of 2-Lane Paved shoulder road. The minister added that the team of 728 NHAI employees and 2500 workers including the team of independent consultants were involved in the job that started on 3 June at 7.27 am and was completed on 7 June at 9:20 pm. The work was completed in record time.
The Amravati to Akola section is the part of National Highway-53 and an important East-West corridor, he added. Passing through the mineral-rich region of the country, the section connects major cities like Kolkata, Raipur, Nagpur, Akola, Dhule, and Surat. He congratulated the NHAI team, consultants, and concessionaire Rajpath Infracon Private Limited and Jagdish Kadam - CMD on achieving the Guinness World Record.
Rajpath Infracon created a world record before this as well. Previously, the contractor made a world record by constructing a road between Sangli and Satara in 24 hours. NHAI evaluated the credentials of the company and then it awarded this prestigious assignment to Rajpath Infracon for the stretch of this (National Highway 6) National Highway 53.
The successful completion of this project and achievement of this record have contributed as a catalyst and helped to promote and uphold the national cause and initiative of “Gati-Shakti”. Rajpath Infracon looks at this as an invaluable opportunity to leave its indelible impression in the domain of nation-building and development commensurate with its motto “Building the Nation Beaming with Pride”.
About the Guinness World Record-
The proposed Guinness World Record was for the longest continuous section of bituminous concrete laid and any infrastructure and construction company involved in a single project can attempt an entry into this award category. The Rajpath Infracon tried to achieve this GWR and its entire team was preparing for this world record for the last six months. This world record was measured by the length of the bituminous concrete laid without break and is expressed in kilometers.
For the purposes of this record, bituminous concrete is, bitumen, rolled asphalt, or tarmac is a material used in civil engineering projects such as road and pavement surfaces made up of pieces of aggregate mixed with asphalt/bitumen as a binding agent. The type and makeup of the best quality bituminous concrete was developed and finalized by Rajpath and this tried and tested composition of the bituminous concrete was then submitted for pre-approval prior to the attempt to GWR and after due consideration of this makeup, GWR approved this makeup of bituminous which is being laid now on the road during this attempt by Rajpath. 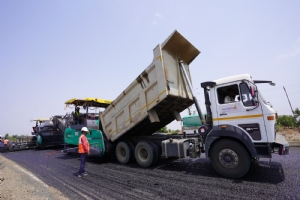 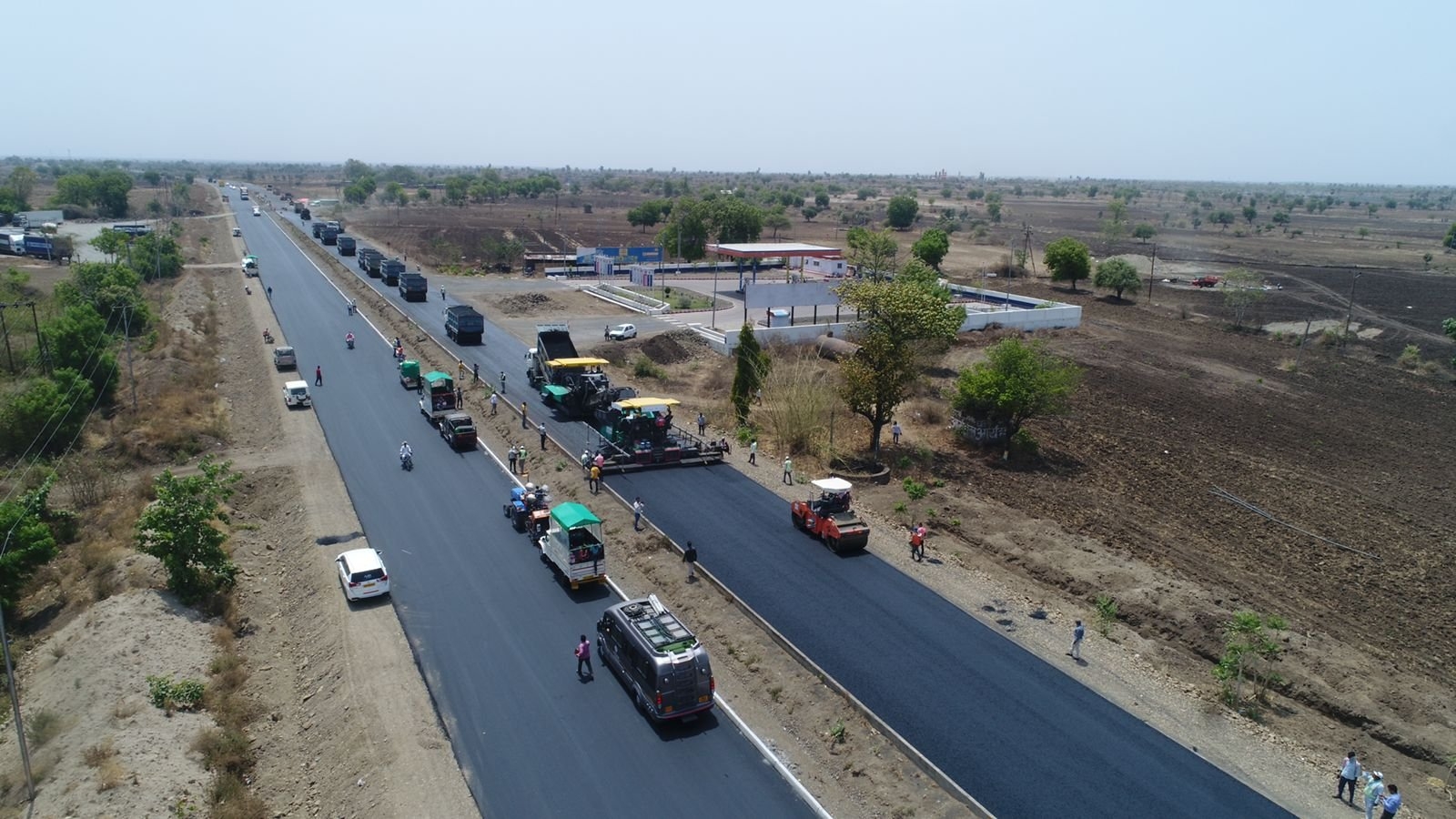 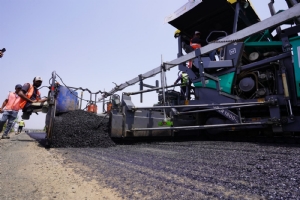 The record is for a continuously laid bituminous concrete surface laid during the attempt, that is to say, that there can be no breaks in the surface as it is laid, distance-wise and time-wise.
All the technical factors such as the quality of the bituminous concrete used in road construction, the exact depth and the width of the road, along with the quality of the base of the road on which the bituminous concrete is getting laid during this attempt are pre-approved even before the attempt with strict quality control norms and are going to be strictly monitored by GWR authorities during the attempt.
The world record was monitored by the Guinness World Records. There are specialist witnesses who are specially examined and then recruited for this world record. All the specialist witnesses have high standard educational qualifications and vast industry experience in the field of road construction and infrastructural developments.
The specialist witnesses were monitoring the entire attempt 24X7 and submitted their periodic reports to GWR at regular intervals by confirming the exact details of the road construction, recording the attempt and the results as well as explicitly confirming that all of the rules of the GWR are being adhered to with the highest level of quality assurance by Rajpath Infracon.
The GWR has specified in the rules and the regulations of the attempt that the foundations of the bituminous concrete which is being laid onto the road must be of local and regional regulation standards, confirmed by the specialist witness appointed for the specific purpose of supervision over the GWR attempt.
According to the GWR rules all the environmental and safety permits for this road construction, legal permits, and approvals are supplied by Rajpath Infracon to GWR even prior to the attempt. High-quality continuous Video evidence is compulsory evidence for this record attempt.